Throughout 2020 and 2021, the Kofi Annan Foundation’s youth initiative Extremely Together, alongside the Kristiyano-Islam Peace Library (KRIS) in the Philippines, the College of Youth Activism and Development (CYAAD) in Pakistan and the Global Community Engagement and Resilience Fund (GCERF) in Bangladesh conducted extensive research among young people in urban areas across South and Southeast Asia.

The analysis, funded by the European Union, identifies ways to foster youth engagement to promote peace, inclusion and social cohesion. The findings indicate the need to develop more training and activities to support youth-led action in local communities to prevent violent extremism. 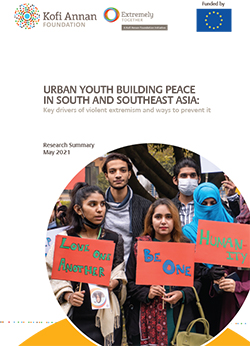 Why South and Southeast Asia?

Although a lack of economic opportunities and lower levels of education are often argued to be factors of vulnerability to violent extremism recruitment in the literature, in recent years, an increase in attacks by middle-class, educated youth has been observed in the region, as well as a targeted approach based on gender stereotypes to recruit women and men into violent extremist groups.

Furthermore, violent extremist groups have been exploiting the COVID-19 pandemic by using narratives around the ‘wrath of God’, shifting recruitment online and taking advantage of insecurities caused by the loss of jobs and use of force by the security forces.

The research, which was conducted in the context of the project ‘Leading the Way to Peace – Youth Together for Social Cohesion’, aims to uncover how and why urban youth may be vulnerable to recruitment by violent extremist organisations and identify and explore potential entry points to engage young people in preventing violent extremism (PVE).

The research in the region agrees that one of the most important approaches to PVE is to engage young people through various means. Firstly, to involve young people in decision-making. This can be decision making at the national or local level, or decision making within their universities. Such participation will help give young people a sense of belonging and ownership over their spaces. Read more in the report >

The findings in all three countries point to the importance of awareness of and adherence to human and fundamental rights. Read more in the report >

To build sustainable PVE programmes, it is essential to build more localised, context-specific programmes. These programmes could draw learnings from the local cultural values that promote co-existence, tolerance, and respect for diversity. Read more in the report >

Providing opportunities for employment and education are an important part of PVE action. Read more in the report >

Gender-specific issues must be considered in PVE action, as the use of stereotypes in recruitment can make men, and especially women, vulnerable. Read more in the report >

Engagement with local government and security forces on youth-based narratives in the context of VE, as well as training can improve the governance and accountability of government. Read more in the report >

Extremist organisations have organised ways to disseminate their messaging using various tools & platforms. These same tools & platforms must be used to spread alternative (not only to counter) messages, raise awareness & combat hate speech. Read more in the report >

The influence of faith-based leaders could be leveraged to debunk interpretations of religious texts that seek to legitimise violence and discrimination. Read more in the report >

Learn more about the research

On Wednesday 26 May 2021, we held an #ETDiscussion, where young peacebuilders from Pakistan, Bangladesh, and the Philippines discussed the research findings.

Safeguarding the Digital Space Ahead of Kenya’s 2022 Elections