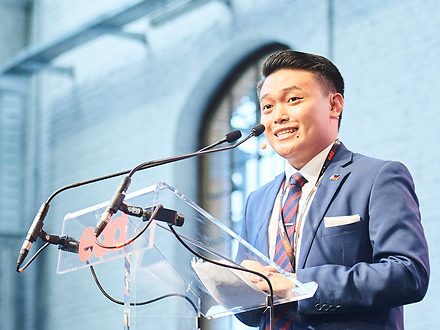 Around the world, young people are losing trust in political institutions and democracy. 52% of the total world population is under 30 years old. Yet, youth are often left out of the conversation when it comes to creating strategies and policies that impact them. The Kofi Annan Changemakers initiative from the Kofi Annan Foundation is one way we aim to change this; by empowering the young of today to become the leaders of tomorrow.

Lourence Balatbat, a 2021 Kofi Annan Changemaker, is the Founder and CEO of Beyond Three Billion (B3B), a non-profit led entirely by young people under the age of 35. B3B fights for the sustainable inclusion of young people in governance and policymaking around the world. Lourence also works at the Senate of the Philippines.

Lourence envisions a world where people under 35 are proportionately represented and actively involved in decision-making processes across all levels of governance, paving the way for a fair, inclusive, peaceful, and equitable society.

Lourence’s journey: It started with books

Lourence’s journey started with his desire to have a community library for underprivileged students. As a product of the Philippine public school system, he recognised how crucial it is for young people to access adequate educational materials. However, despite countless calls to address the disparity in access to these academic resources, little to no action was taken.

Lourence felt frustrated that young people were not being listened to and were part of a system that unfairly disadvantaged those most in need. “When I finally understood that my voice would not be heard by the system as long as I was ‘too young,’ I decided to take matters into my own hands.”

In 2017, Lourence joined MCW Global, a non-profit organisation whose mission is to address communities’ pressing needs by empowering current leaders and readying leaders of tomorrow. At MCW, Lourence was taken seriously, and his ideas were listened to. Within a year, he was able to build the library he had envisioned.

“Without young people having the power and chance to provide input on the matters that affect them, social inequalities will prevail in the status quo,” says Lourence, who took the opportunity to influence a system that felt indifferent to the voices of younger generations.

His experience with the library and his time with MCW spurred him to found Beyond Three Billion (B3B), a youth-led non-profit organisation that fights for young people’s sustainable inclusion in governance and policymaking around the world.

Beyond Three Billion: The Future Leading the Future

Beyond Three Billion operates in 4 countries – Benin, Papua New Guinea, Philippines, and Nigeria- leveraging research to develop and implement its programmes. B3B advocates for reforms and creates new avenues for democratic participation to include more people under 35 in decision-making spaces.

As a youth–centred organisation, B3B values the role of young people in shaping nuanced policies in the community. “For instance, the B3B team in Papua New Guinea joined 13 other youth-serving organisations for an initiative by the United Nations Population Fund (UNFPA) – PNG to put together a submission to the Special Parliamentary Committee on Gender-Based Violence of the Papua New Guinea National Parliament,” Lourence mentions.

B3B takes a context-specific approach, considering the specificities of politics within each country they operate. “By collaborating with local governments, we work and create a bridge between young people and the policies being created by engaging local authorities and policymakers to consider the inputs submitted by our youth participants,” says Lourence. B3B continually strives to ensure that at least one seat is made available to a person under 35 in every local council where they operate.

“Young people’s marginalisation in decision-making is social exclusion, and it must end now.”
– Beyond Three Billion

Empowering the digital youth of today

With the help of the Kofi Annan Foundation, Lourence is developing a digital platform for B3B to improve constructive dialogue between youth and local decision-makers. The platform will make the information more accessible and transformative by sharing strategic insights, evidence-based knowledge, and practical information with users. It will also allow the local government to share information about ongoing policies and programs.

B3B envisions that by 2040, over three billion people under 35 will have institutionalised representation and decision-making powers over matters that shape their future.

Lourence wants to create an equitable world where people under 35 are no longer seen as emerging or budding leaders but simply leaders in their own right. “To every young person out there trying to make a difference, never doubt your abilities to make a dent in the world. Keep taking incremental steps towards your goal, surround yourself with those who share your vision, and always be reminded of why you started,” says Lourence, hinting that challenges and setbacks are part of the process and are an indicator that one is on the right track.

“You are not too young, not too inexperienced, and not too naive for wanting to change the system — you are a visionary.” While there is no secret recipe to being a changemaker, Lourence has three tips: rest, find a mentor, and have fun!

One young changemakers’ vision to transform lawbreakers into peacemakers

Creating a movement for Indigenous Farmers: An Interview with Zeinorin Stephen Angkang