Home | News & Media | Kofi Annan | How can we defeat a virus? Kofi Annan had the answer 20 years ago 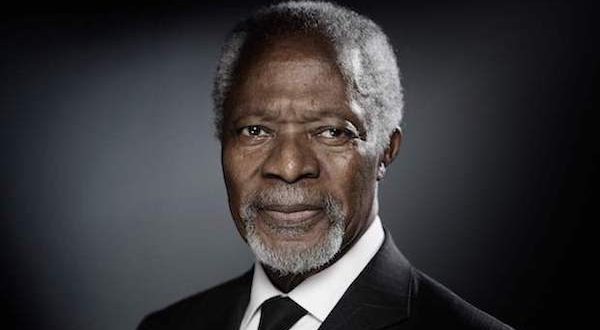 The chair of the Kofi Annan Foundation, Elhadj As Sy, urges all leaders – in governments, businesses, multilateral and regional organizations – to show the same foresight and courage as Kofi Annan did 20 years ago when dealing with the Covid-19 pandemic.

Twenty years ago, Kofi Annan told us how to defeat a virus – together.

The African Union Special Envoy, Strive Masiyiwa, noted recently with some bitterness that not a single vaccine vial had yet left a European factory for Africa. So far, 80 per cent of vaccines have gone to wealthy countries, while only 0.3 per cent have gone to low-income nations. This dramatic imbalance in access to vaccines is not just a moral disaster; it is also a recipe for failure. A pandemic cannot be tackled in one part of the world and not the other. The rapid spread of the Delta Variant and the third wave currently striking thousands of people, old and young, in Africa, shows that no continent is immune.

The pledge by G7 leaders assembled last month in Cornwall to donate one billion doses of vaccine gives us hope. It shows growing awareness in the international community, which has scrambled to address the human and socio-economic consequences of the Covid-19 pandemic – that none of us will be truly safe from the virus until all of us are safe.

But experience tells us that many pledges do not translate into action on the ground. Equitable access to vaccines and other health commodities remains a significant issue of contention. It will remain so unless leaders truly step up.

“…none of us will be truly safe from the virus until all of us are safe.”

Lessons from the past: How Kofi Annan put the fight against infectious diseases on the global agenda

Although this crisis is unprecedented, there are lessons to be drawn from past experiences with infectious diseases, especially from the fight against AIDS. The AIDS response in the 1980s and 1990s tragically revealed the limitations of market dynamics concerning public health. When the disease spread through the African continent, millions of people died because of a lack of access to effective and affordable treatment. Leaders talked of the need to support Africa in the fight against AIDS but finding agreement on concrete modalities for doing so proved elusive.

It was the late UN Secretary-General Kofi Annan who managed to pull everyone together. Annan forged a global consensus on the way forward in a Declaration adopted at the UN General Assembly Special Session on HIV/AIDS in June 2001. The Declaration was the culmination of a long process of engagement, mobilization and careful diplomacy.

In January 2000, Kofi Annan, alongside US Ambassador Richard Holbrooke, succeeded in placing the issue on the agenda of the UN Security Council. The first time the Council discussed a health issue since its formation in 1945. At that meeting, many African ministers spoke of the thousands needlessly dying because they could not access therapies available in the North.

Annan set to work on creating a Global Fund dedicated to the battle against HIV/AIDS and other infectious diseases, which he proposed at an African Summit held in April 2001 in Abuja. This was to become the Global Fund to Fight AIDS, Tuberculosis and Malaria, formally endorsed by the General Assembly in its Declaration. Annan also worked with pharmaceutical companies and convinced them to offer lifesaving medications to developing nations at significantly reduced prices.

Sustained and bold leadership on Annan’s part and many others meant the international community could set itself a goal to eliminate AIDS as a public health threat by 2030. While many challenges remain that could derail the achievement of this goal, antiretroviral therapy is now accessible to over 25 million patients worldwide.

In the fight against Covid-19, our leaders need to step up, as Kofi Annan did 20 years ago

Today we need our leaders -in governments, businesses, multilateral and regional organizations – to show the same foresight and courage. We cannot afford to lose more time in the face of a virus that continues to spread, mutate, and kill.

With the Access to Covid-19 Tools (ACT) Accelerator, world leaders have already created a powerful mechanism to deliver a coordinated and equitable global Covid-19 response. Yet, due to the lack of funding and donated vaccines, the ACT Accelerator has so far been unable to fulfil its mandate at the scale and speed needed. And even when the vaccines become available, some countries will have limited ability to absorb the doses.

Yes, the pledges announced in recent weeks, including the commitment by the G7 leaders, are a step in the right direction. But much more needs to be done, including on issues such as technology and know-how transfer. Diversifying vaccine manufacturing capacity and strengthening health systems to allow for large-scale vaccine rollouts. And, importantly, improving preparedness for future potential public health emergencies.

Today we need our leaders – in governments, businesses, multilateral and regional organizations – to show the same foresight and courage as Kofi Annan did 20 years ago

This pandemic is a potent reminder of the need for global solidarity, fairness, and collaboration across countries, sectors, and generations. Kofi Annan once said: “It is my aspiration that health finally will be seen not as a blessing to be wished for, but as a human right to be fought for.” Human dignity and rights must be guaranteed, no matter where people live. Policymakers need to ensure universal access to treatment and vaccines. We are only as strong as the weakest link in the global health system. Only by coming together to build an equitable and fair system can we overcome this and future threats to humanity.

Elhadj As Sy is the Chair of the Kofi Annan Foundation Board and Former Secretary-General of the International Federation of Red Cross and Red Crescent Societies.