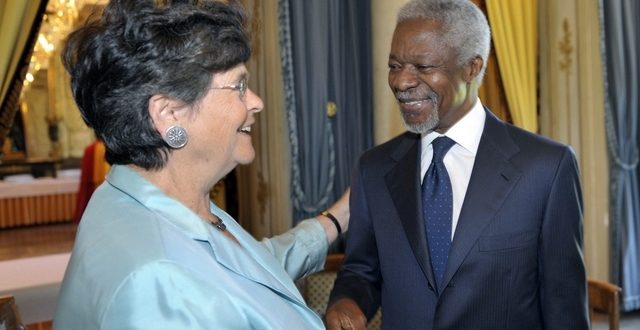 The following article was written by H.E Mrs Ruth Dreifuss, former President of Switzerland and chair of the Global Commission on Drug Policy. The article was written on the occasion of the 72nd World Health Assembly, where Kofi Annan’s contributions to global health and drug policies were recognised. It was originally in Tages-Anzeiger.

GENEVA – This week, as representatives from all countries gather in Geneva for the World Health Assembly, a notable person, who did so much to advance global public health solutions, will be sorely missed: Kofi Annan, who passed away in summer, 2018. On Monday, May 21, 2019, he was commemorated at an event dedicated to his legacy and contributions in this field. His convictions, his commitment remain an incentive for health policy at the service of all, without discrimination due to income or prejudice.

Breaking the taboo around AIDS

When Kofi Annan became Secretary-General at the UN just before the turn of the century, ignorance and denial of the HIV / AIDS epidemic were at its height, and new infections were rising dramatically. The poor could not afford the drugs that meant a lifeline.

Kofi Annan was instrumental in breaking the taboos around AIDS. Using diplomatic prowess and his charisma to convince leaders to act- and if that did not help, then Kofi Annan spoke up: “Friends, we know what it takes to turn the tide against this epidemic. It requires every president and prime minister, every parliamentarian and politician, to decide and declare that ‘AIDS stops with me. AIDS stops with me.’”

Kofi Annan demanded that deeds followed lofty proclamations. When Governments invested less than one billion dollars for the prevention and treatment of HIV / AIDS, he demanded ten. Annan lobbied relentlessly until the Global Fund to Fight AIDS, Tuberculosis and Malaria was founded. As Secretary-General he convinced the pharmaceutical industry to make antiretroviral drugs affordable. Today, they are accessible to over 21 million patients.

“It is my aspiration that health finally will be seen not as a blessing to be wished for, but as a human right to be fought for.”
– Kofi Annan

Being stigmatized and shunned by large parts of society, speaking up for people affected by HIV was not a matter of course for a Secretary-General of the United Nations in those days. However, under Kofi Annan’s leadership, the world saw that those most affected, sex workers, gay, transgender persons must make their voices heard and ask for their rights to be respected. He summarized his vision as follows: “It is my aspiration that health finally will be seen not as a blessing to be wished for, but as a human right to be fought for.”

In his final years, he campaigned for another group, whose rights are still not recognized universally: people who use drugs, who in many parts of the world are being stigmatized, imprisoned, and even killed. In many parts of the world, fear keeps people who use drugs from seeking medical help. Today’s international drug policy is often divorced from scientific evidence, causing more harm than it does good. Therefore, a group of former political leaders and other eminent persons – Kofi Annan and myself included – formed the World Commission on Drug Policy to break the impasse and shift the debate towards evidence-based policies. We demanded that drug use be treated first and foremost as an issue of public health and not as a criminal issue.

The Swiss drug policy, with its four pillars (prevention, therapy, harm reduction, as well as repression) to which I contributed, is considered a strong example worldwide. And therefore Kofi Annan invited me to present it and the successes of our policy to his native West Africa and to support the West Africa Commission on Drugs the Kofi Annan Foundation had launched.

Convened by Kofi Annan, the West Africa Commission (WACD) on Drugs comprises a group of distinguished West Africans from the worlds of politics, civil society, health, security and the judiciary.

Given the deeply held cultural and religious views, drugs are often seen as devil’s work, and so pragmatic arguments alone do not always resonate. Kofi Annan was prescient in ensuring that the Commission be constituted by respected West Africans only, who would find clear words about drugs, human rights, and public health. In the meantime, Senegal has established the first Government supported harm reduction program, and Kofi Annan’s native Ghana is discussing reforming its drug laws in parliament.

It is essential to decriminalize drug use and possession for personal use, to enable people who use drugs to access dedicated health centres without fear. Regulating drugs is critical to break the power of the cartels and remove the most harmful drugs from circulation. Kofi Annan supported this fully. He used to say: “I believe that drugs have destroyed many lives, but wrong government policies have destroyed many more.”

The original objective of international drug policy is stated in the Preamble to the 1961 «Single Convention on Narcotic Drugs»: It should protect the « health and welfare of mankind.» These goals were missed. It’s time to implement the reforms that Kofi Annan has fought for so hard during his lifetime.

Ruth Dreifuss is Chair of the Global Commission on Drug Policy, former President of Switzerland and former Federal Councillor in charge of Home Affairs.

Drug trafficking and consumption undermine institutions, threaten public health and damage development efforts. However, Kofi Annan believes “that drugs have destroyed many lives, but wrong government policies have destroyed many more”. He speaks out on drug policy reform globally as an advocate for a science- and health-centred approach.

What We Owe to ’s Legacy in Global Health by H.E. Ruth Dreifuss

Lift the Ban! on Why It’s Time To Legalize Drugs

West Africa has a drug problem